Nearly 400 petitions addressed ‘to the King’s most Excellent Majesty’ and other key political authorities in seventeenth-century England are now available on British History Online. Full transcriptions of these manuscripts are now free to read online, alongside more than 1,300 local petitions that we have already transcribed and published. The new volume is a sample of 387 items drawn from the ‘State Papers’ collection held at The National Archives in London.

Hundreds of ‘petitions’ – formal written requests or complaints – were submitted to England’s central authorities every year in this period by people from across  the social and political spectrum. The transcriptions in this volume are only a small sample from the waves of supplication received by the nation’s rulers, but they nonetheless provide a strong sense of the sorts of concerns expressed by people at the time. Rather than focusing on well-known controversies or famous individuals, we simply selected the first four available petitions from each year that were preserved in the State Papers Domestic. This means that the range of topics touched on here is fascinatingly miscellaneous. 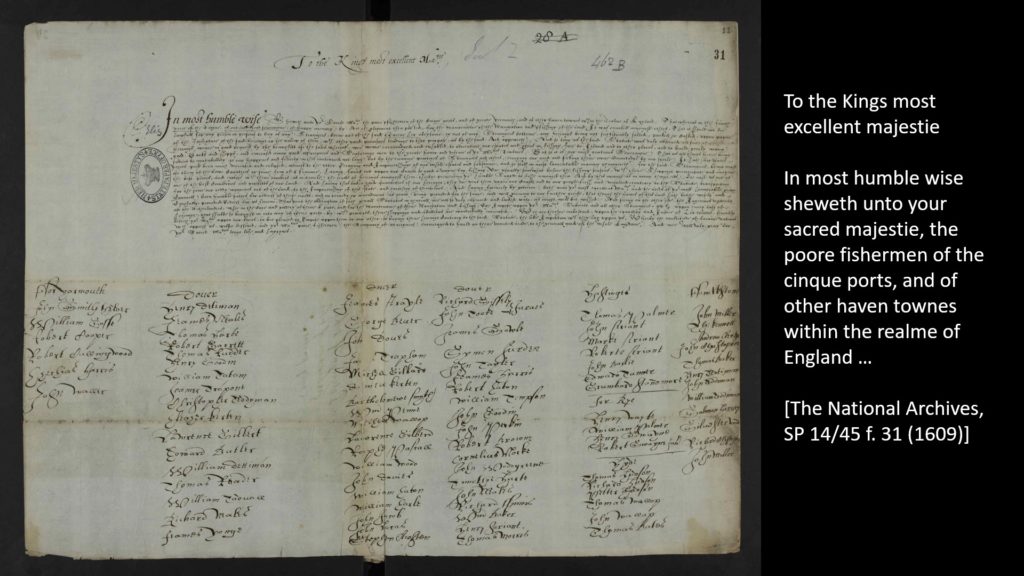 One finds many petitions like the complaint submitted by ‘the poore fishermen of the cinque ports’ to King James I in 1609, expressing their anger at foreign fishermen who ‘spoile’ their livelihoods. According to these petitioners, the ‘cuninge practizes of straingers’ from the Low Countries allowed them to monopolise the best fishing areas and sell their catch in English markets. This, they claimed, could be prevented by imposing a royal tax on such sales, ‘wherby the multitude of foraine nations which oppress us wilbe lessened’ and trade will increase ‘to the generall good of the whole kingdome’. The petition was signed by almost 100 individuals from six different ports, showing the high levels of organisation that can already be found in petitioning even at the beginning of the century. 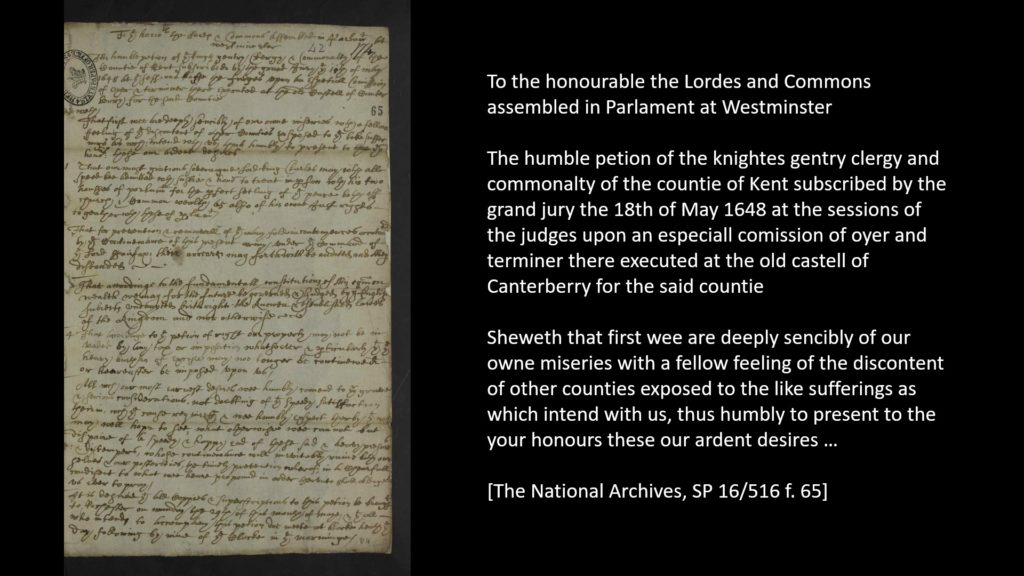 This volume includes some highly political petitions like the one submitted to Parliament by ‘the knightes gentry clergy and commonalty of the countie of Kent’ in May 1648 which asked for peace talks with Charles I, the disbanding of the army, the upholding of ‘the fundamentall constitutions of this common wealth’ in legal trials, and the abolition of the excise. The petitioners claimed that, unless Parliament listened to them, there would be no end to ‘these sad and heavy presures and distempers, whose continewance will inevitably ruine both our selves and our posterities’. It was subscribed just days before the outbreak of a royalist revolt in this county. Such overtly partisan petitions are rare to find in the State Papers, but those that survive can illuminate some of the great political struggles of the age.

Alongside these collective petitions, the volume also includes large numbers of requests for mercy or pardon from individuals accused of serious crimes as well as even more requests from men and women for favour in the form of grants of offices, pensions, lands or tenancies. Others touch on a huge range of topics including diplomatic interventions, trading privileges, aristocratic titles and much else. 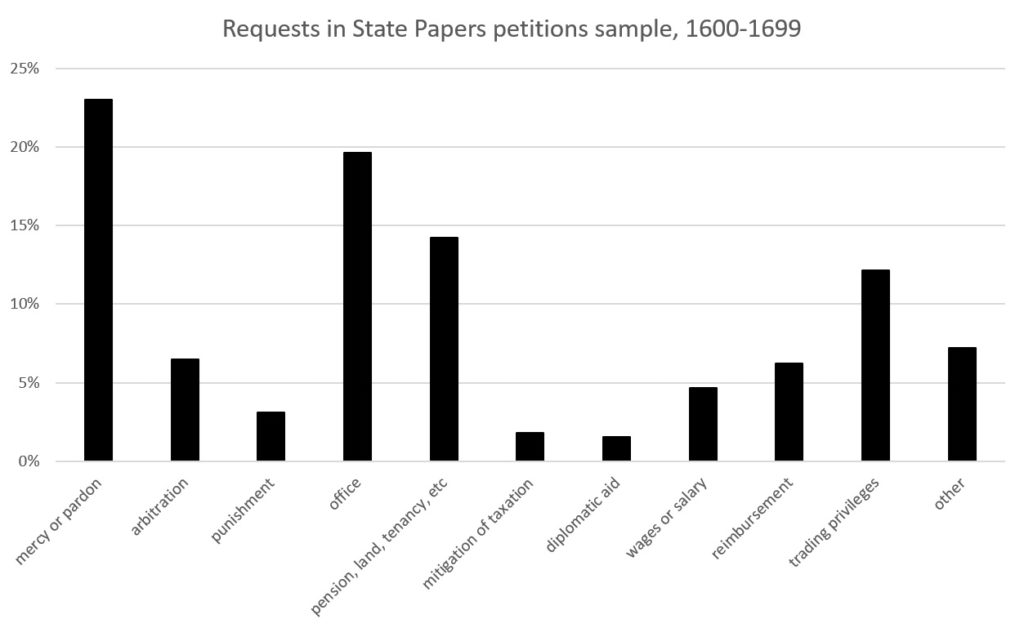 If you want to know more about petitioning in early modern England to better understand the context of these documents, you could start by reading our free ‘very short introduction’ and then move on to our ever-expanding annotated bibliography of published scholarship. Each volume also has an editorial introduction briefly reviewing who sent these petitions, the topics covered, their place in the archives, and more. We will be publishing further guidance and advice on this site eventually, but for now just dive into the sources:

The volumes were edited by Brodie Waddell and transcribed by Gavin Robinson. Preparing the texts for online publication on British History Online was completed by Jonathan Blaney and Kunika Kono of IHR Digital.

We are extremely grateful to The National Archives who supported the creation of these new transcriptions. We highly encourage readers to take advantage of their extensive collections to pursue further research on the individuals and communities mentioned in the petitions. We are also grateful to the Arts and Humanities Research Council for their financial support, without which these volumes would not have been possible.

This new volume is part of a series of seven planned volumes, including five comprising petitions to the quarter sessions of Cheshire, Derbyshire, Staffordshire, Worcestershire and the City of Westminster, which have already been published. The final volume will be petitions to the House of Lords. We will announce the last volume here when it is complete.