To the right honorable the lords and others [illegible] Queenes majesties most honorable [privie?] counsell.

Pleaseth your most honorable lords that your humble suppliant garter principall king of armes passed lately in companie with certaine gentlemen neare the Temple Barre London; and howe that Master John Hele sarjeant at lawe came ryding after your orator faster on horsbacke with footecloth then was for his gravitie convenyent or for him lawfull; and pressed so neare upon your suppliant was in danger to be hurte by the purposed rude carriage, and violent rayninge of his horse; wherby your oratour was forced to say [so sir?], will yow ride over one; wherunto the said Master Hele answered, yt is no great matter to ryde over an asse, thou foole, thou asse and so reytterating those woordes in the audyence of many gentlemen and much people he rode on faster then your suppliant could overtake him, leaving by those and many other reproches by him uttered a perpetuall imputation of defamation to your orator and to his utter discredit and undoing for his name credit and service, in her majesties office, unlesse it may please your most honorable lordships to punishe and redresse the same. Wherefore in humble remembrance that seeing it hath so pleased the Queens most exellent majestie in her most royall and princely [renowed?] wisdome by letteres patentes under the great seale of England, to graunte unto your suppliant that her office of garter to be principall king of armes of England, and the cheefe officer of armes for her highness most noble order of the garter, together with that name style, tytle and preheminence, etc. like to her predecessors in that office wherin your orator hath served her majestie, 38 yeares, employed sundry tymes into France and Germanie, and Italie, and in this late service in great hazard of his life, knowen to your lordships spent his tyme in all dutifull and daylie attendance to her majestie, the judgment for his knowledge experience and intelligence in that office your suppliant doth submitt to the most gratious clemencie of her majestie, and the censure of your most honorable lordships whome the said [illegible] hath touched and defamed in that behalf. And further that the said Master Hele hath continuallie theis x yeares past [discre…nd?] enveighed openlie at the assizes in the cittie of Excester, and other places against the credit of certaine testimony [illegible] matters of armes, and the hand and ancyent seale for the office of the said garter to be a testimoniall for [vaga…?] [illegible] same ancyent seale of his office to be like a pardoners seale and his hand and certificat to be of no credit, and like the [ha…?] [illegible] […ificate?] of a [paltriny?] constable for vagabondes to begge with all All which the said Master H. hath many wayes and in sundrie places [illegible] to the utter discredit hinderance and undoing of your suppliant (that never gave him cause let him alleage it). And nowe for that [illegible] Master Hele is a man of such wealth and bouldnes a sargeant at lawe, and seeketh all advantages still against your orator prayeth that first his witnesses in this case Master Robert Cotton of Connington esquier and Master Morgan of the Middle Temple counseller at lawe with other his proofes may be produced in your highnes presence. And that the said Master H. sargeant may be commanded to appeare before your lordships humblie beseeching your lordships to take consideration for the satisfaction and future [credit?] and quyet of your suppliant whome your lordships and the knightes of the most noble order of the garter are bounde to defend in his [right?] for all vyolence and injuryes by their justice and equitie. And further that your suppliant being by birthright a gentleman of name and armes sonne and heyre of a knight, and besides the respect of his tyme and place and office which the said Master H: cannot challenge. And for that his parentes of late, and now himself hath taken chopped and changed and unlawfullie purchast and assumed newe cote and achievement of armes etc made without authoritie nether [seene?] nor allowed by your oratour and [illegible] king of armes, and her majesties officers in that behalf [illegible] contrarie to her highness most royall [commandmentes?] and princely prerogative; whom thalmightie preserve and your lordships in all prosperitie [illegible]

William Dethick’s grievance springs from an altercation with John Hele, sargeant-at-law. Hele rides past Dethick in a threatening way; when Dethick remonstrates, Hele abuses him, in front of others, as an ass and fool. Dethick claims a history of conflict with Hele, in Exeter and other places. Drawing on his service to the Queen as Garter Principal King of Arms, Dethick seeks action against Hele. To support his claim, he names witnesses to the incident, one of whom is Robert Cotton.

The Garter Principal King of Arms (also Garter King of Arms or simply Garter) is the senior King of Arms, and the senior Officer of Arms of the College of Arms, the heraldic authority with jurisdiction over England, Wales and Northern Ireland. The position has existed since 1415. In 1601 the position was held by Sir William Dethick. 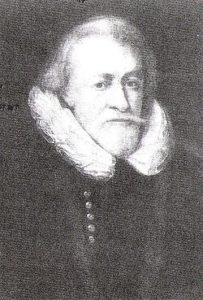 William was the son of Sir Gilbert Dethick who died in 1584 and who was also Garter Principal King of Arms. William was educated at St John’s College Cambridge and was known as an armourist and antiquarian. He was a long serving officer in the College of Arms. He was appointed  Rouge Croix Pursuivant of Arms in 1567 and York Herald of Arms in 1570. On 21 April 1586 he took the title of Garter.

In his professional capacity Dethick was well qualified and highly regarded by his peers. However, he seemed to have a disregard for rules. He used an inappropriate seal and bribed the Clerk of the Signet to gain extra powers in his patents as Garter. He was forced to surrender these powers but stayed in power until 1604. He fought this for two years and was eventually paid off with a pension of 200 pounds.

Dethick had a reputation of being known for conflict with colleagues and others. There were several instances of physical assault.   In 1573 Mary White, the wife of Chester Herald reported that Dethick assaulted her with a coal basket and rubbed hot ashes into her hair. He was also reported to have attacked his father with his fists, stabbed his elder brother, and stabbed another man while at a funeral in Westminster Abbey.

King James knighted Dethick on 13 May 1603. A year later James sent him along with Sir Robert Spencer with gifts to Frederick I, Duke of Württemberg which consisted of jewelled carters, chain and collar.

Dethick died in 1612 and was buried in the old St Pauls.

Serjeants-at-law were an order of senior barristers created by Henry II and they remained until gradually replaced by Queen’s Counsels during the reign of Elizabeth I. They were the only people able to represent people in the Court of Common Pleas. There were never more than 10 at one time and often fewer. In 100 years there were only 89 appointed.

Born around 1543 Hele was the sixth son of Nicholas Hele and Margaret Dune of Cornwood, Devon. He studied at the Inner Temple eventually becoming the Lent Reader. He was the Member of Parliament for Exeter in 1592 and remained until 1601. He was also the Recorder for Exeter from 1592 to 1606.

In 1594 he became serjeant-at-law and in 1602 he was appointed the Queen’s serjeant to Elizabeth I. When James I ascended the throne in 1603 he remained in position and was knighted.   He was called to act during the trial of Sir Walter Raleigh in 1603 but withdrew due to ill health.

Hele originally had a good reputation but this faded around 1600 when he was criticised for money lending and his methods of trying to recover the debt. Such criticism prevented him from becoming Master of the Rolls.

In 1601 he lost a large sum on loans made to some influential people connected to the Earl of Essex, who had been his benefactor. He also made loans to Baron Cobham. Cobham became caught up in the Main Plot in 1603 and Hele used his legal position to seek repayment.

In the annals of Parliament some contemporary opinions of Hele have survived. A creditor, Lord Keeper Egerton, drew up a memorandum in 1601 when Hele was angling for the mastership of the rolls:  ‘a most greedy and insatiable taker of fees … a notorious and common ambidexter, taking fee on both sides, to the great scandal of his place and profession … a great drunkard, and in his drunkenness not only to have commonly used quarrelling and brawling words, but sometimes blows also; and that at a common ordinary, a vice ill becoming a sergeant.

Other contemporaries were similarly critical: ‘His usury, misery, law and pride of his purse has brought him to that height of insolency as he is grown insufferable in our country and … few or none dare to publish this knowledge or conceit of him.’

As regards this petition, Hele did not deny his violent conduct to Dethick and the Star Chamber ruled against Hele because of his treatment of Cobham. He was suspended from office, fined and imprisoned for six weeks. 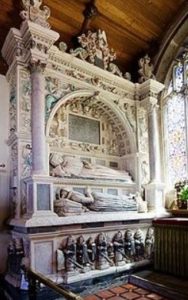 Hele had a large fortune which enabled him to acquire a substantial property portfolio, including an estate at Wembury near Plymouth, where he built a mansion. He owned a house at Kew, a manor called Shirford, at Knighton in Warwickshire, a manor at Yealmpton in Devon and an estate called Orcheton in Modbury.

Hele died in June 1608 and was buried at Wembury where a magnificent tomb still stands.

Cotton was born on 22 January 1571 in Denton, Huntingdonshire, the son of Thomas Cotton (1544–1592) of Conington  and his first wife Elizabeth Shirley, The Cotton family originated at the manor of Cotton, Cheshire, from which they took their surname. He was educated at Westminster School where under the influence of William Camden he studied antiquarian topics. He started collecting rare manuscripts. He graduated from Jesus College Cambridge in 1585 and the following year he entered the Middle Temple. He continued collecting rare books and his collection surpassed the royal collection becoming known as The Cotton Library

Cotton was elected a Member of Parliament for Newtown, Isle of Wight in 1601 and as Knight of Huntingdonshire in 1604. He helped to devise the institution of the title of baronet as a means for King James I to raise funds: like a peerage, a baronetcy was heritable but, like a knighthood, it gave the holder no seat in the House of Lords.

Cotton supported the claim of James VI of Scotland to succeed Elizabeth I and was commissioned to write a thesis defending James’s claim to the throne, for which he was rewarded with a knighthood in 1603.

Cotton was not elected to the 1614 Parliament. In 1621 Cotton advised James I on the impeachment of Sir Francis Bacon concerning the respective roles of king and Parliament. He was subsequently elected to Parliament for Old Sarum (1624), Thetford (1625) and Castle Rising (1628).

His approach to public life was as an obligation gleaned from his studies and he had a trust in Parliament. In 1628 he published “The Dangers wherein the Kingdom now Standeth, and the Remedye”. The Royalists regarded him as an enemy and his library was confiscated in 1630 and was not returned until after his death. There is a bust of Robert Cotton by Louis-François Roubiliac.

It is believed in his early life Cotton married Frideswide Faunt but this is not mentioned in his papers.

In about 1593 he married Elizabeth Brocas, the daughter of William Brocas of Theddingworth in Leicestershire. This marriage took place about a year after the death of Cotton’s father, and helped to shore up his financial position, as Elizabeth was an heiress.

Cotton died on 6 May 1631 and is buried in  All Saints Churchyard, Conington. Huntingdon District, Cambs.