To the Kings most excellent majestie

Most humbly sheweth unto your sacred majestie

That whereas it pleased your majestie out of your gracious favour and compassion to bestowe your peticioners unfortunate husbandes estate upon her towardes her mayntenance and releife.

But soe it is, that Thomas Mompesson your peticioners husbandes second brother takeing advantage of his absence doth not only most injuriously deteyne the greatest part of her said husbandes estate but alsoe withholdeth such present mayntenance as should acrue unto your peticioner. Soe as the said estate by reason of manye debtes being much perplexed her husbandes said creditours can neither be satisfied nor your peticioner receive that benifitt which it pleased your highnes to bestowe uppon her, except your petitioner should wadge lawe against him which in respect of her smale abillitye she is not able to undergoe; and alsoe the title of his intangled estate and certainty of his greatest debtes are only in her husbandes owne knowledge.

May it therfore please your most excellent majestie out of your princlye compassion to comisserate her present distresse, and for the rectifieinge thereof to give leave unto her said husband that he may now (for some short tyme at your highnes pleasure) retorne into England without prejudice, aswell to settle his broken and perplexed estate, wherby to give content to those whome he is indebted, as alsoe for the establishinge of what your poore petitioner ought to enjoye.

And howsoever as in duty she is bound shall ever pray for your majesties long life and eternall happines.

[paratext:] At the court at Theobalds 17o February 1622. / His majesties pleasure is that Master Secretary Conway prepare a lycence (ready of his majesties signature) therby giving leave to the petitioners husband to return into England, and here to remaine without molestacion for the space of three monethes (soe as it bee in private manner) to the end hee may settle his estate, take order for the payment of his debtes, and make provision for the maintenance of the petitioner his wife. / Sydney Mountagu.

Katherine Mompesson (d. 1633) was the second wife of Giles Mompesson (1584-c. 1633). She was the daughter of Sir John St John of Lydiard Tregoze in Wiltshire. Giles married very well (c. 1606/7) and in 1614 became MP for Great Bedwyn, thanks to Katherine’s family’s influence – her sister Barbara married Edward Villiers, brother of George Villiers, Duke of Buckingham, the favourite of James I and Prince Charles.

Giles was clearly a vocal and aggressive MP from the start and keen to make his mark. He soon came under the patronage of the Duke of Buckingham and was knighted in 1616. In the same year Sir Giles was granted a patent for the licensing of inns, which brought him an annuity of  £100 and a 20% share of the takings. Mompesson’s abuse of this patent brought him considerable profits and caused an outcry, but he was supported by the attorney-general Sir Francis Bacon. Sir Giles was then granted a valuable patent to sell decayed timber from the Crown Estates and abused this as well (probably profiting by some tens of thousands of pounds), being accused, among other things, of illegally selling timber destined for the Navy. Not content with this, Mompesson became involved in the New River Company, the scheme to supply fresh water to the capital. Once again the money rolled in and he continued to add other sinecures, commissions and patents to his portfolio. Unfortunately the bulk of his considerable income was acquired by means of threats and bullying and there were also accusations that he took bribes.

In 1621 Parliament prompted by an uneasy Bacon, by now lord chancellor, began a campaign to suppress a number of dubious monopoly-patents, especially those held by Sir Giles, whose malpractice and peculation were notorious and beyond ignoring. Despite a vigorous counter-attack Mompession was arrested by the serjeant-at-arms. At this point, his patrons abandoned him, despite his attempt to spread the blame while at the same time appealing for help to the Villiers family and even to the King. Allowed home to collect papers relevant to his defence, Sir Giles escaped through his wife’s chamber and fled to France. Unprotected, Mompession had the book thrown at him: a proclamation was issued for his arrest, he was expelled from the House of Commons, his knighthood was removed (‘degraded’), he was banished by the King, outlawed perpetually, exempted from pardon, banned from Court, fined, and deprived of his lands and goods for life. He was also to be marched along the Strand with his face to a horse’s tail. Such was his scandalous fame, that he even appeared as Sir Giles Overreach in Philip Massinger’s play A New Way to Pay Old Debts and was also the subject of a furious engraving.[1]

Despite all this Mompession did not remain crushed for long, and in 1623 his wife submitted this petition requesting permission for him to return and wrest his affairs from his brother Thomas, who was taking advantage of Giles’s absence and attempting to take over his lands and property. Mompesson was allowed to return, and appears to have attempted to resuscitate his patent for inns, was summarily banished the following year, but finally crept back to Wiltshire and became the agent of an ironworks in the Forest of Dean belonging to Lady Villiers. Even this didn’t go well, and in 1631, during riots against the enclosure acts, the commoners threw an effigy of Mompesson into a pit and buried it.

During the Civil War Mompesson allied himself with the royalists, and his property was sequestrated by parliament. In his will of 1651 he was still referring to the ‘grevious crosses, afflictions and calamaties’ he had had to bear. He is presumed to have died circa 1663 and his estate passed to his nephew Thomas. 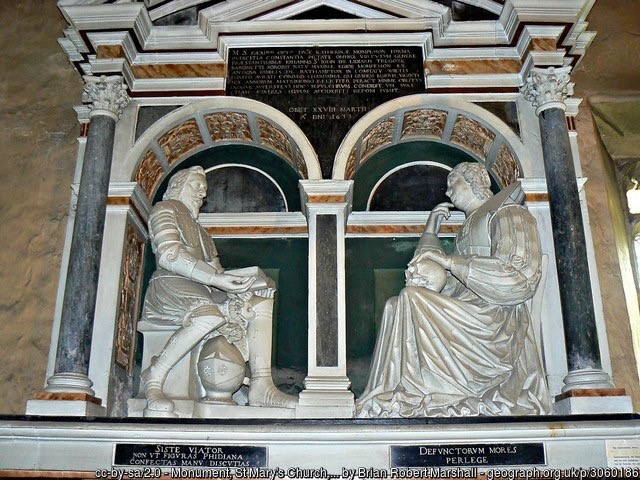 Katherine pre-deceased him, and her husband erected a grandiose monument with statues of both her and himself and a fulsome inscription in the church of St Mary at Lydiard Tregoze. Nicholas Pevsner calls this a ‘delightful piece, full of pensive melancholy’.[2]

The two other names on the petition are those of Master Secretary Conway (Edward Conway, 1st Viscount Conway) [3] and Sidney Montagu,[4] both creatures of the Duke of Buckingham.

This report is part of a series on ‘Petitioners in the reigns of Elizabeth I and James I, 1600-1625’, created through a U3A Shared Learning Project on ‘Investigating the Lives of Seventeenth-Century Petitioners’.