To the right honourable the jointe committees for the safety of both kingdoms.

That your peticioner hath by his study and practice found out severall waies very helpfull and profitable in warre (and wilbe a greate saveing of bloudshed and of much money, and in such waies as hath not beene formerly used, as is expressed in the propositions hereunto annexed.

And hee shall pray etc.

Edmund Felton, probably born during the years around the turn of the seventeenth century, came from a family of minor gentry who were committed members of the Church of England.   His father Thomas was a pursuivant – a post which he served profitably by tracking down people who refused to attend the Church. Unfortunately, his circumstances changed as he lost his job in 1602 when he was usurped by one Sir Henry Spiller and nine years later died a pauper in Fleet prison.[1]

Edmund Felton thereafter lived a precarious life, trying to take revenge on Spiller and thus finding himself for several years in Kings Bench and Newgate’s prisons. The petitions he sent to the authorities during this period indicate that his lack of money was also an overriding factor. In 1652, years after his father died, he petitioned Oliver Cromwell. ‘Has spent much time and money to do the State service by his inventions but has not been able to get a trial thereof, nor for the last 12 years obtain justice against that great malignant, the late Sir Hen. Spiller, for great oppressions and losses which were set out in books printed and twice presented to each member of the Parliament, including his Excellency.’.[2]

The above inventions which preoccupied Edmund show us that he was a man of ideas. He also must have hoped that they might improve his financial circumstances.  In 1642 during the early years of the Civil War he proposed what appears to be a type of armed tank: ‘An Engine for war, to keep the foot from the horse, and also secure the musketeers from all shot but of ordnance … which Engine in good ways two men may manage at pleasure …  One Engine supplies the place of forty pikemen in rank and file’. He goes on at length to suggest great savings in money and men on the battlefield, even describing a hypothetical battle with two hundred of his engines doing ‘better service than 6,000 horses and 20,000 foot’ soldiers. (He wasn’t wrong, but rather ahead of his time in the ability to manufacture them.)

Another of Edmund’s inventions was a waterproof broadcloth which Jacob Peregins (sic) a London merchant had made into riding coats that he and his friends had used for three years and ‘rid in great rains, yet hath not the inside of the said coats been wet.’[3] 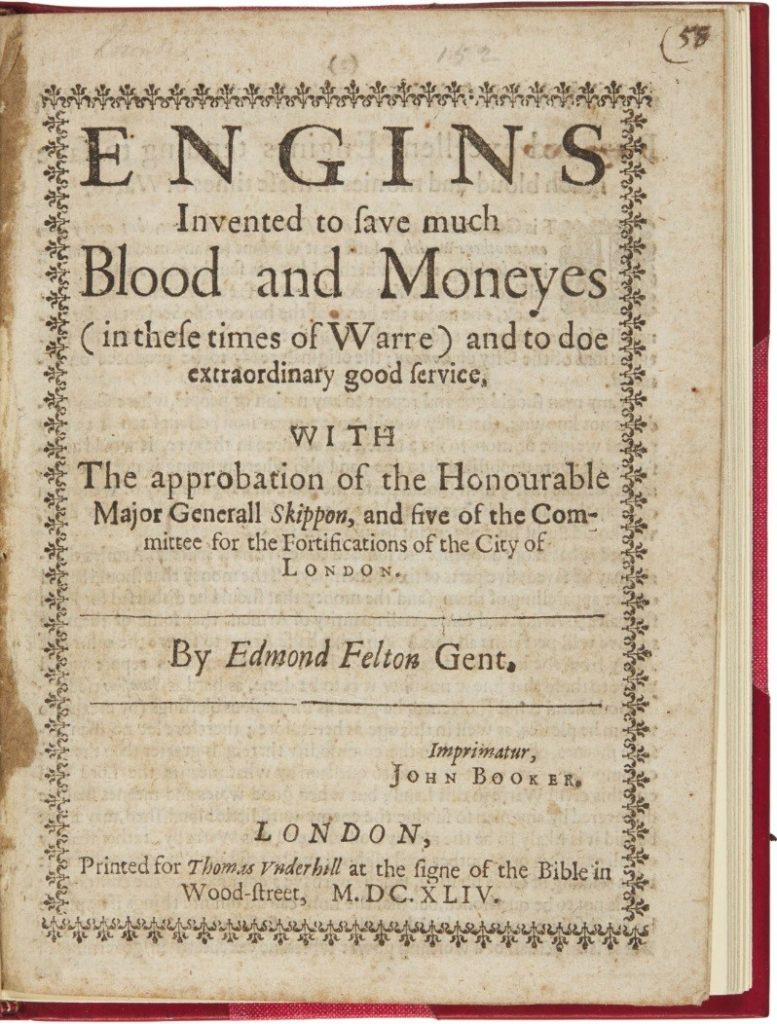 He carried out tests which were witnessed by his supporters and, although his endeavours were given testimonials by prominent people such as Major General Skippon, his petitions were ignored.  He even produced an eight-page pamphlet in 1644 to promote his ‘engins’, a copy of which was auctioned at Sotheby’s London in November 2019. This came from the Cottesloe Military Library and was the first copy sold at auction for over forty years.[4]

What happened to Edmund Felton after this continued disappointment is unknown.  He was probably in his sixties when he petitioned yet again for his ‘Engin’ in 1664, twenty years after his original proposals. He seems to have died in obscurity without a will.

[4] Edmond Felton, Engins invented to save much blood and moneyes (in these times of warre), London, 1644, courtesy of Sotheby’s, London, https://www.sothebys.com/en/buy/auction/2019/the-cottesloe-military-library/felton-engins-invented-to-save-much-blood-and.

This report is part of a series on ‘Petitioners in the reign of Charles I and the Civil Wars’, created through a U3A Shared Learning Project on ‘Investigating the Lives of Seventeenth-Century Petitioners’.