To the Kings most excellent majestie

That your sayd royall father by letters patents under the great seale of England did give power to your petitioner Sir William Davenant to erect a playhowse, and to entertaine one company of players

That your majestie the 20th of August in the 12th yeare of your majesties raigne under your majesties privie seale and signe manuall for the reasons therein alledged were gratiously pleased to command Sir William Wilds recorder of London and diverse other justices of the peace therein named to prohibite all publique actinges of comedies and tragedies in any of the playhowses in or neare the cittie of London. And by another warrant under your majesties signe manuall were gratiously pleased to give warrant to Sir Jeffery Palmer your majesties Attorney Generall to prepare a bill for your majesties signature to passe the great seale of England conteyning a grant to your petitioners to give them full power and authority to erect two companyes of players consisting of such persons as they shall choose and appoint and to purchase build and erect such two howses or theatres for the representation of comedies and tragedies as shallbee thought fitt by the surveyor of your majesties workes [pront?] etc upon which graunt your petitioners have to their great charge erected two play howses and made some progresse without any infringement to the grant of the said Sir Henry Herbert and Simon Thelwell (as your petitioners humbly conceave:) yet notwithstanding have the sayd Sir Henry Herbert and Symon Thelwell presumeing that they have the power over tragedy and comedy (thinges not so much as mencioned in their patent in Easter terme last past brought their accion at common law against your petitioners thereby pretending that they are disturbed in the execucion of their office

[Paratext:] Att the court at Whitehall January 16 1661/2. His majesty is graciously pleased to referre this peticion and the matter in controversy to the committee intimated in the prayer, or any three or more of them: who are to examine the [illegible] whole businesse, and upon a full hearing of the partyes concerned to endeavour an amicable composure of the differences between them; or otherwise to certify his majesty the state of the businesse, and what hinders why such a composure cannot be effected. Whereupon his majesty will declare his further pleasure.

The petition relates to a monopoly given to Sir Henry Herbert and Simon Thelwell to build and operate a playhouse and players for a fee of £10, which were forbidden at the time. Thomas Killigrew, Groom to the Bedchamber, and Thomas Davenport, Gentleman to the Privy Chamber, had set up in competition and the owners of the monopoly were taking action to prevent this. The petitioners sought a review.

Killigrew was one of twelve children of Sir Robert Killigrew of Hanworth, a courtier to James I and theatre manager. He was married twice to Cecilia Crofts who died in 1638, and Charlotte van Hesse-Piershil in 1655. He was buried alongside his first wife but ignored his second wife in his will.[1]

Thomas became a page to King Charles I at about the age of thirteen. According to Samuel Pepys, as a boy, Killigrew volunteered as an extra, or “devil” at the Red Bull Theatre, so that he could see the plays for free.

A Royalist, he followed Prince Charles into exile in 1647 and in 1651 he was appointed Charles’ representative in Venice. In 1660, Killigrew returned to England and Charles rewarded his loyalty by making him Groom of the Bedchamber and Chamberlain to Queen Catherine of Braganza. He had a reputation as a wit and Samuel Pepys wrote that Killigrew had the office of the King’s fool and jester, with privilege to mock and revile even the most prominent without penalty.

Along with Sir William Davenant, he was given a royal warrant to form a theatre company in 1660. His troop of players performed at the old Red Bull Theatre but in 1663, the company moved to the new Theatre Royal in Drury Lane.[2] He was an incompetent manager; constantly in disputes with his actors, and had to bribe his stars to keep working for him. Having inherited the rights and repertory of the old King’s Men, the King’s Company performed many of William Shakespeare’s works.

In 1673, Killigrew was appointed Master of the Revels. He lost control of his theatre in a conflict with his son Charles in 1677.  He died at the Palace of Whitehall on 19 March 1683. 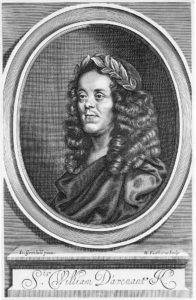 Portrait of William Davenant, 1673, from Wikipedia

Davenant is believed to have been born in late February 1606 in Oxford. He was the son of Jane Shepherd Davenant and John Davenant, proprietor of the Crown Tavern (or Crown Inn) and Mayor of Oxford. His godfather is said to have been William Shakespeare, who, according to John Aubrey, had stayed frequently at the Crown during his travels between London and Stratford-upon-Avon. It was rumored that he was the Bard’s biological son.[3]

He attended Lincoln College, Oxford, for a while in about 1620, but left before gaining any degree. He became a page to the Duchess of Richmond.  In London in 1630, he was treated for syphilis. As a convalescent, he left for the country in 1632. The syphilis severely disfigured his nose, resulting in damage that is discreetly depicted in John Greenhill’s portrait. His ruined nose was the subject of much ribald comment by his enemies.[4]

In 1623 he married his first wife Mary, about whom little is known. In 1652, he married his second wife, Anne Cademan, the widow of the doctor who cured him. She died in 1655.  His married Henrietta Maria du Tremblay (d. 1691) whom he met while travelling in France in 1655.

Following the death of Ben Jonson in 1637, Davenant was named Poet Laureate in 1638. He was a supporter of King Charles I in the Civil War. In 1641 he was declared guilty of high treason by parliament after he participated in the First Army Plot, a Royalist plan to use the army to occupy London. He fled to France, returning to join the King’s army when the war started. He was knighted two years later by Charles I.

In 1645, after the Royalist defeat at the Battle of Naseby, he retired to Paris, where he became a Roman Catholic and worked on his epic poem Gondibert. That same year he was appointed Emissary to France, and in 1649 was given the symbolic post of treasurer of the colony of Virginia by the exiled Charles II. The following year, he was made lieutenant governor of Maryland, but was captured at sea, imprisoned, and sentenced to death. In July 1650, he was put on trial, along with others at the High Court of Justice. He is said to have been saved by the intervention of John Milton. He spent all of 1651 in the Tower of London, where he continued writing Gondibert.

He was released in 1652 and pardoned in 1654. In 1656 he held the first performance of an English opera, and also included England’s first known professional actress, Mrs. Coleman.

Davenant was imprisoned in 1659 for his part in an uprising. He was, however, released the same year, and left for France. Davenant returned to England and in 1660, was granted a monopoly along with Thomas Killigrew of public theatre performances. He headed the Duke of York’s Men and produced highly successful theatrical seasons at Lincoln’s Inn Fields from 1660 until his death in 1668.

Herbert was born in 1595, the son of Richard Herbert of Montgomery Castle, and a younger brother of Edward Herbert, Baron Herbert of Cherbury and the poet George Herbert. Their family was related to the Herbert Earls of Pembroke, prominent figures in English government.

Herbert was knighted in 1623 and was a member of both the Short and Long parliaments. After the Restoration he again served in parliament until his death.

He was appointed Master of the Revels in 1641 (for which he paid £150 a year) which involved reading and licensing plays and supervising all kinds of public entertainment, for which he received an income.

Herbert was a powerful influence on the English theatre from 1623 to 1642 but his role became dormant during the Civil War. Following the Restoration Thomas Killigrew and Sir William Davenant were granted their monopoly which irritated Herbert. He started a series of court actions which failed. He died in 1673.[5]

Wilde was born about 1611 and was the eldest son of William Wilde, vintner of Bread Street, London. He was a student of Clifford’s Inn and of Inner Temple in 1630. In 1637 he was called to the Bar. He was Recorder of London from 1659 to 1668. On 27 March 1660 he was elected Member of Parliament for the City of London in the Convention Parliament.

On 13 September 1660, Wilde was created a baronet. He was appointed King’s Serjeant on 10 November 1661 and was made one of the judges of the court of common pleas in 1668, advancing to become a justice of the King’s Bench in 1672. He was described as a “grave and venerable judge” and was deprived of his office a few months before his death in 1679 because he (correctly) disbelieved the evidence of Bedloe in the “Popish Plot”.[6]

This report is part of a series on ‘Petitioners in the reign of Charles II, 1660-1685’, created through a U3A Shared Learning Project on ‘Investigating the Lives of Seventeenth-Century Petitioners’.