What is a petitioner? These petitions have two types of participant. Most QS petitions have one or more named petitioners at the head of the petition (often, “The humble petition of X”), including in some cases people on whose behalf the petition was made. Meanwhile, subscribers are those who signed their names in support of the petition, either in the space below the main text or on an attached document. In some petition archives, collective petitions, which have only subscribers (and might have thousands of them) are the most familiar type of petition; this is rather less common in QS records, and it’s quite common for QS collective petitions not to have any named subscribers either. [Other names which may appear on petitions are not considered here: signatures of clerks, lawyers, judges or other officials; and mentions of individuals, especially the subjects of petitioners’ complaints, in the body of a petition.]

It should be noted that the Derbyshire collection is only a partial set of surviving petitions in the Derbyshire QS records which are, moreover, a bit different from the other counties’ archives (in that they did not survive in the usual sessional organisation). Many petitions were excluded because they couldn’t be dated and there were very uneven clusters among those that could). I’ve kept them in the analysis for now, but they’re often very anomalous and I’m increasingly doubtful that anything can be read into the differences. 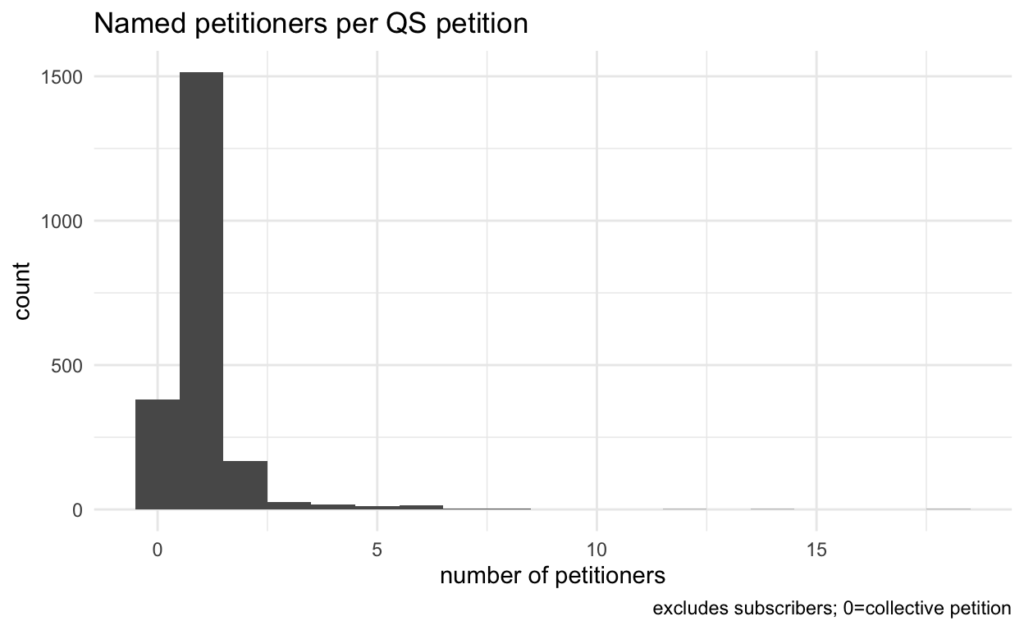 This shows subscribers only, for petitions that have them, and excluding a tiny handful of petitioners with more than 50 subscribers. Once again, 1 is the most frequent number of subscribers, but there is a much longer tail. Subscribers average 9.75 per petition, cf. 1.27 petitioners. However, more than a third of collective petitions had no signatures at all (168); obtaining signatures was clearly not essential to support collective petitioning

The proportions of solo / collective / group petitions can vary geographically.

The percentage of group petitions appears to be relatively consistent across the counties (except for Derbyshire); the main variation here is between single and collective, hinting at regional variations in petitioning cultures. 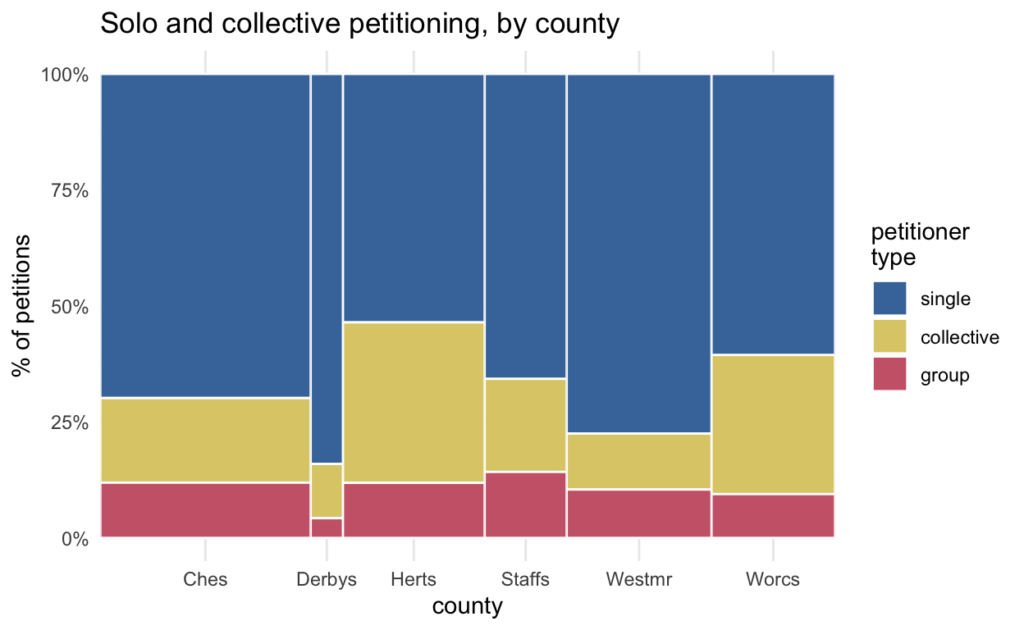 Because of the larger number of topics, it’s more effective to focus on the proportion of petitions by solo petitioners rather than the full breakdown. (This time, the size of squares is used to indicate the number of petitions in the group.)

Petitions complaining about local rates and taxes clearly tend to be group/collective affairs, or at least presented as such (communities organising together to complain about unfair rate assessments compared to other towns or villages more often than individual complaints of unfairness compared to neighbours). Dissenters’ petitions, though a small category, are specifically applications to license places of worship and brought by local communities rather than single individuals. On the other hand, more predominantly solo efforts include petitions about military relief, poor relief and child support. 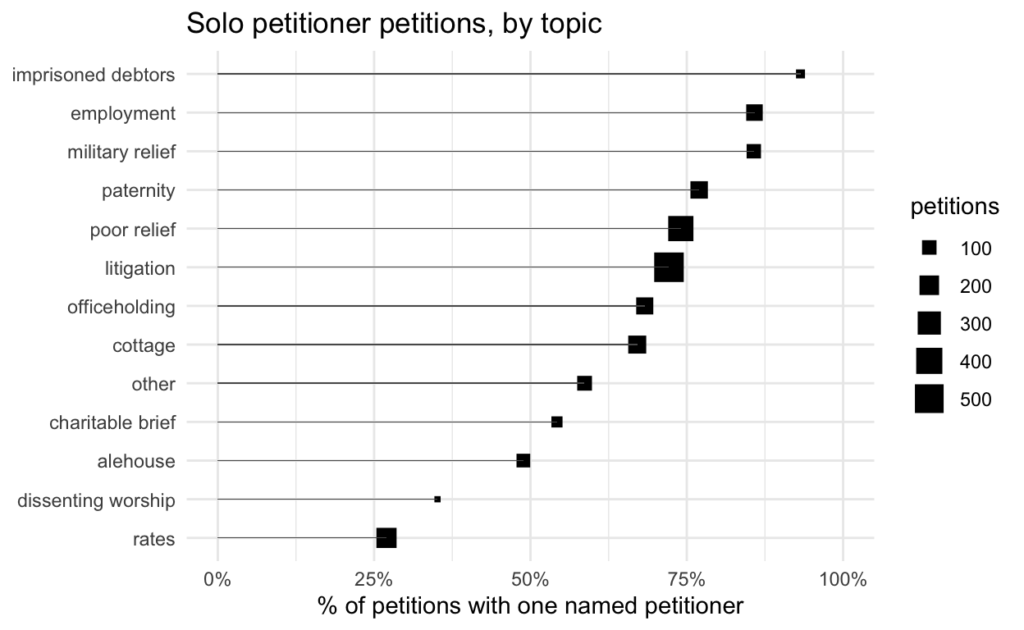 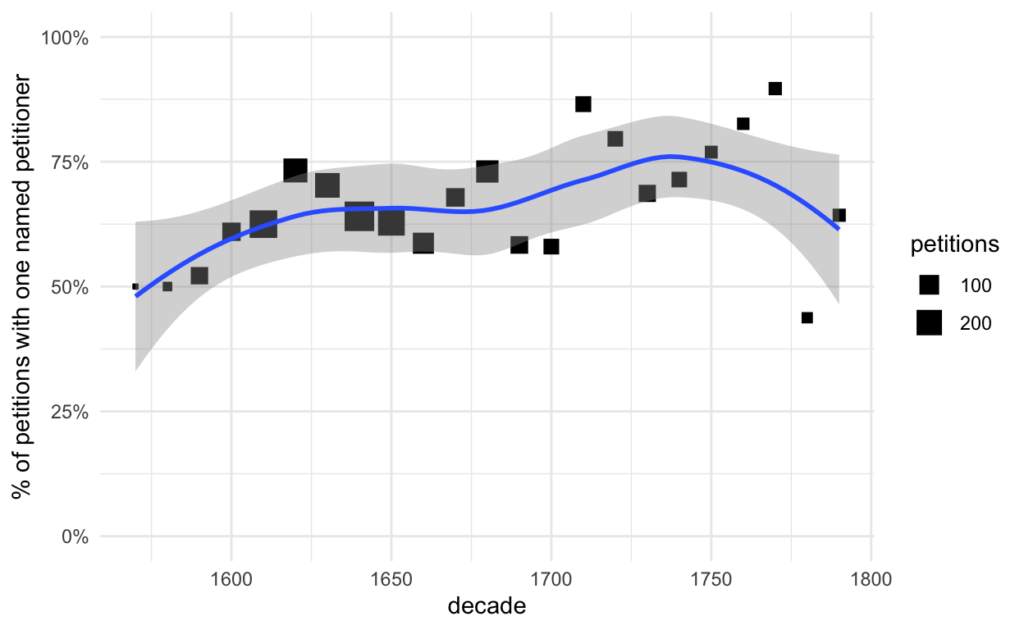 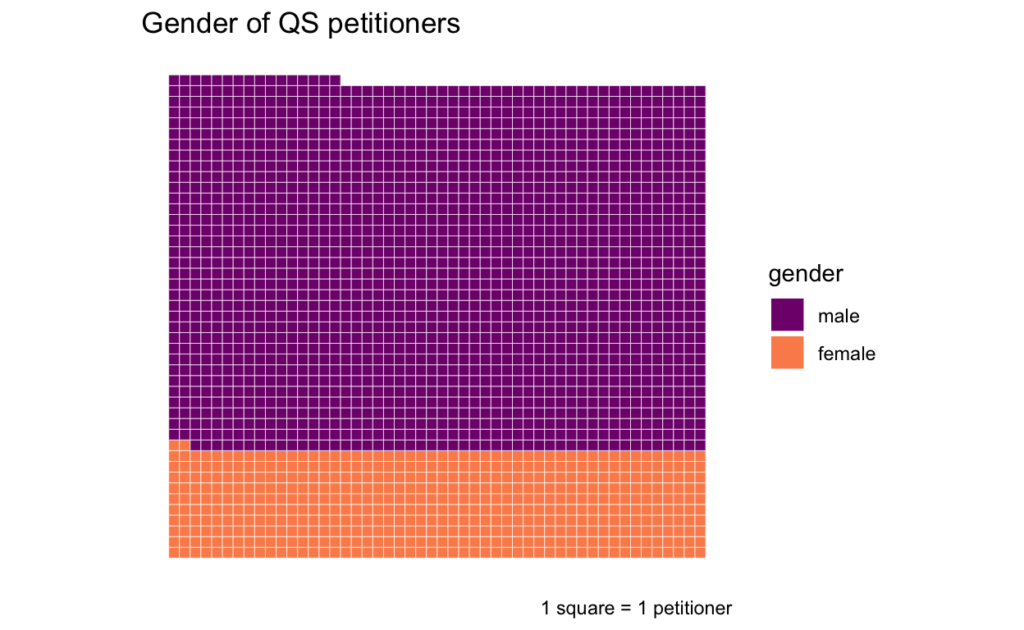 But the gender disparity is much greater for subscribers, of whom only about 2% are women. 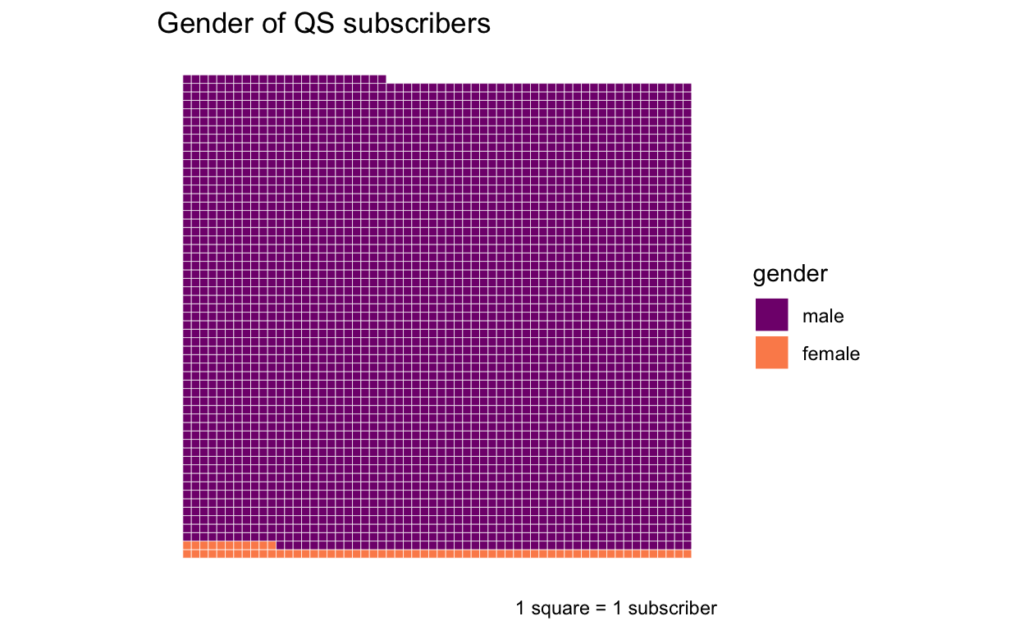 Women are also more likely than men to be solo petitioners. 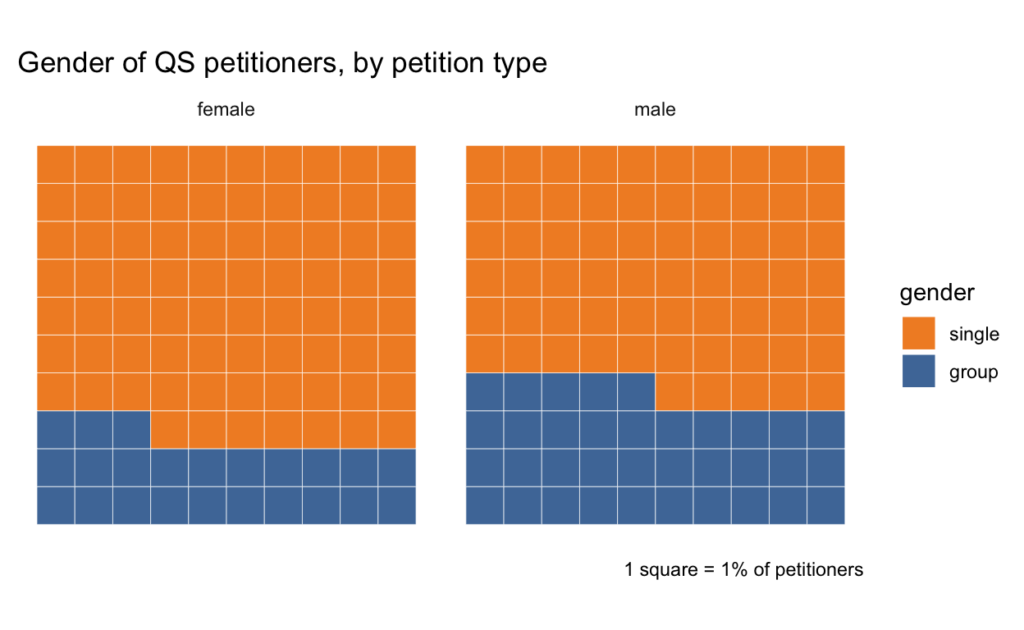 Moreover, there are no all-female petitioner groups larger than two people (women also tend to be very much in the minority in larger mixed groups). So it’s clear that men were far more involved with petitioning as an organised collective or group activity. The absence of women as subscribers may imply that supporters were most often recruited on a household basis, with men signing as heads of households. 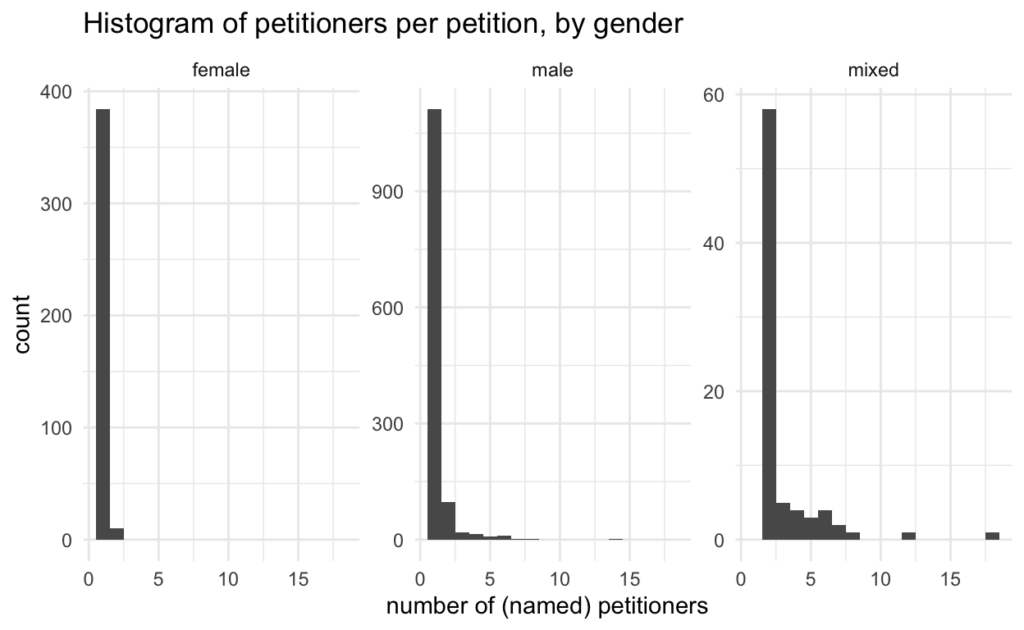 Comparing gender across counties: Herts and Staffs are noticeably lower female % (about 15%) than the other four counties (25-30%). 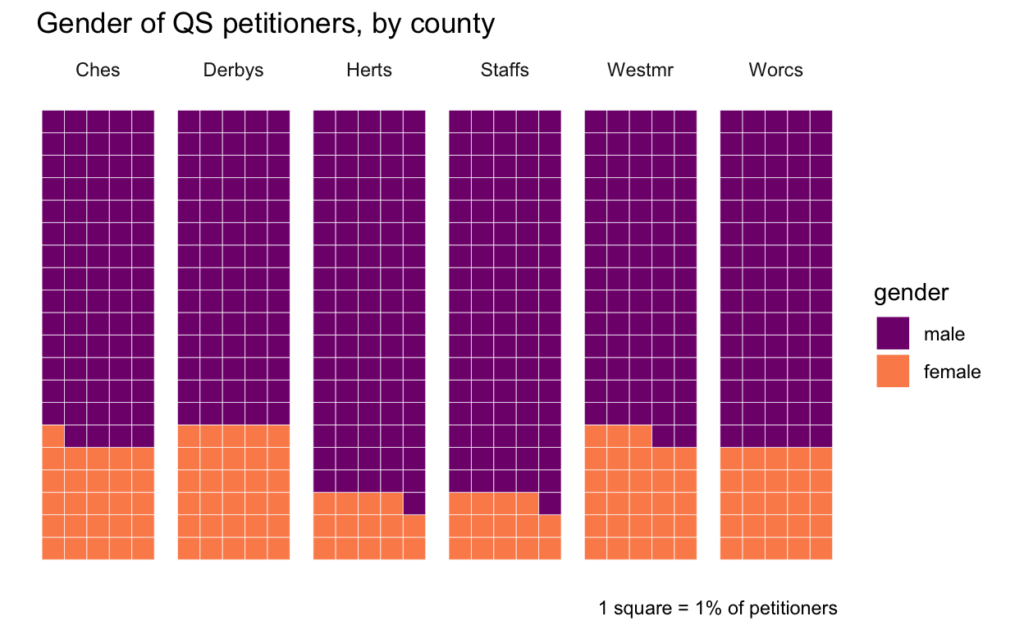 It’s not very surprising that female participation also varies with petition topic (and this at least to some extent correlates with topics that were more or less likely to be solo vs group/collective); in particular very few women are involved in petitions about rates, while approaching half of petitioners for poor relief. 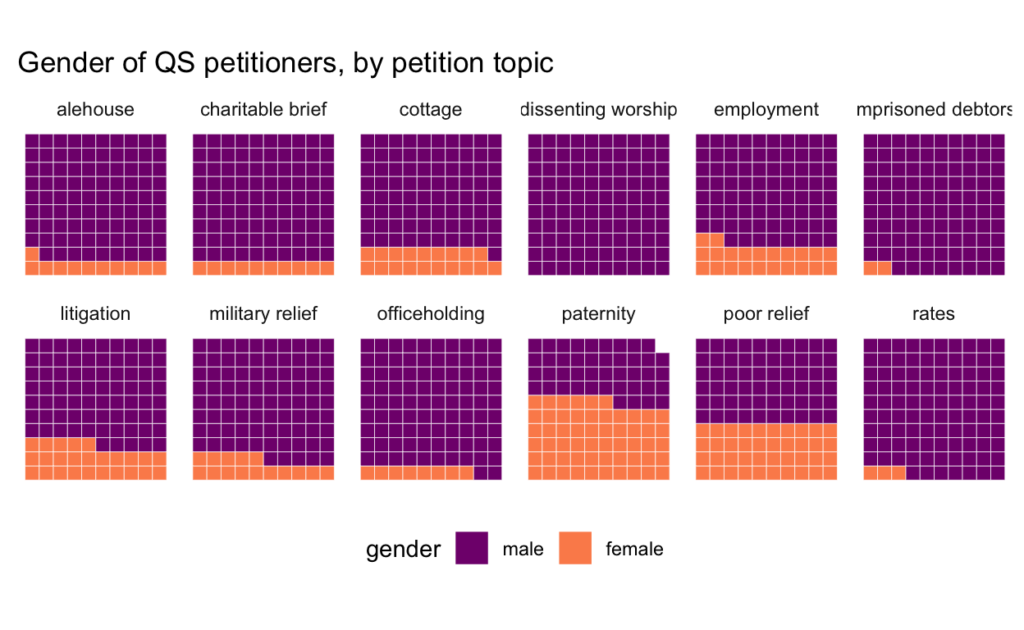 There was no requirement to sign a petition and the majority of petitioners did not sign their petitions at all. Therefore, this is not an attempt to analyse signatures for evidence of literacy. But why did some petitioners sign their names if the majority didn’t bother? What, if anything, is the social/cultural/legal significance of a signature in a petition? It might not be the same as in witness examinations or other legal documents (for which signatures usually were required). So I’m curious as to whether there are any patterns of interest.

I don’t have any signatures data for Herts and I only have partial data for the untranscribed Cheshire petitions, so they’re excluded from this section. Overall, there’s some kind of signature data for 24% of petitioners in the transcribed collections.

In transcriptions, signatures were also marked up for “type” of signature:

The last of these can be difficult to interpret. In most cases, it’s not because the petition was written by the petitioner; inspection of the Cheshire petition images indicates that the only instances of this were less typical petitionary letters. In some cases – certainly for subscribers – it looks possible that the petition is a copy rather than the original document. For petitioners it’s hard to be sure whether it’s a copy of an original autograph or a scribal decision to write out the name as a kind of pseudo-signature and so I’ll only include them in breakdowns by signature type.

Initials are very rare (<10, only 1 of which is for a petitioner) and so are counted with marks for this analysis. However, this in itself seems quite noteworthy, as I might expect them to be more common based on my recollection of other types of document in early modern court archives such as witness examinations. (Though I wouldn’t guarantee that my memory is reliable, and I’d need some data to verify this.)

Moreover, as can be seen, even when combined marks and initials are not very common (only 2% of all petitioners signed this way, or 12% of signatures excluding scribal) – considerably less common, I suspect, than in witness examinations even though I might expect petitioners to be of fairly similar social status to witnesses. 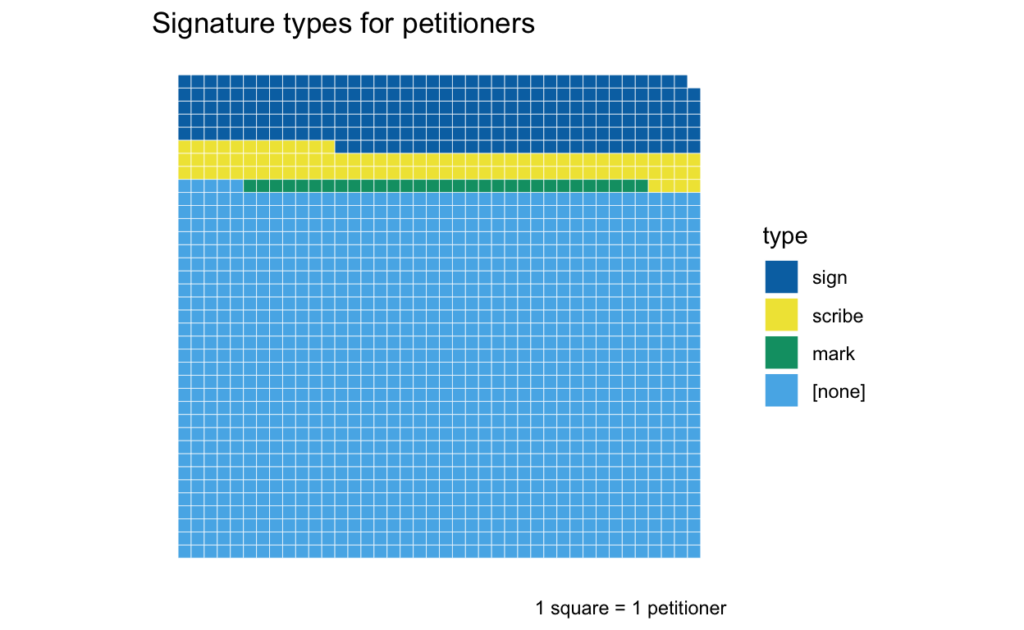 The same for subscribers, and here (since there are no “[none]” to worry about) the low percentage of supporters signing by mark/initials is really striking, at about 4% (excluding scribal). This carries some clear implications about the social status of subscribers, and potentially these rates could be compared to data from studies of literacy. 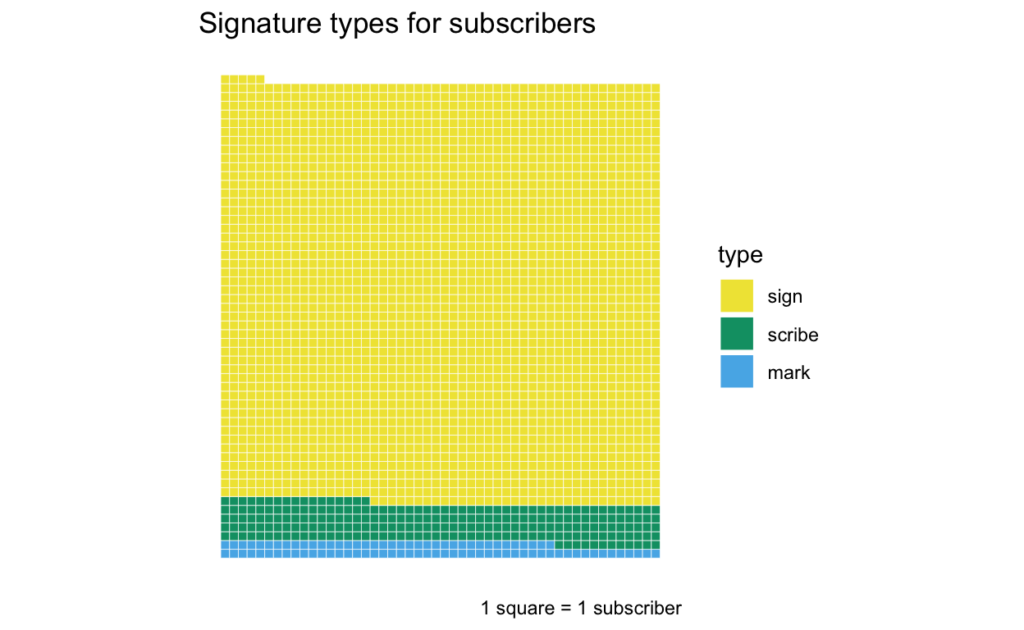 Not for the first time, Derbyshire is anomalous and difficult to interpret because of its small numbers and gaps (and the high % of scribal “signatures” may say more about the county’s clerks and record-keeping practices than about its petitioners). Cheshire doesn’t offer the same excuse and the low % of petitioners signing is very striking. Worcestershire meanwhile has a considerably higher % of marks than the other counties.

Westminster has by some distance the highest % of petitioner signing their names, and (notwithstanding my caveats) that probably really does reflect higher levels of literacy in London. But it’s highly unlikely that literacy was significantly lower in Cheshire than in neighbouring Staffordshire and Worcestershire, so why are the % so much lower? 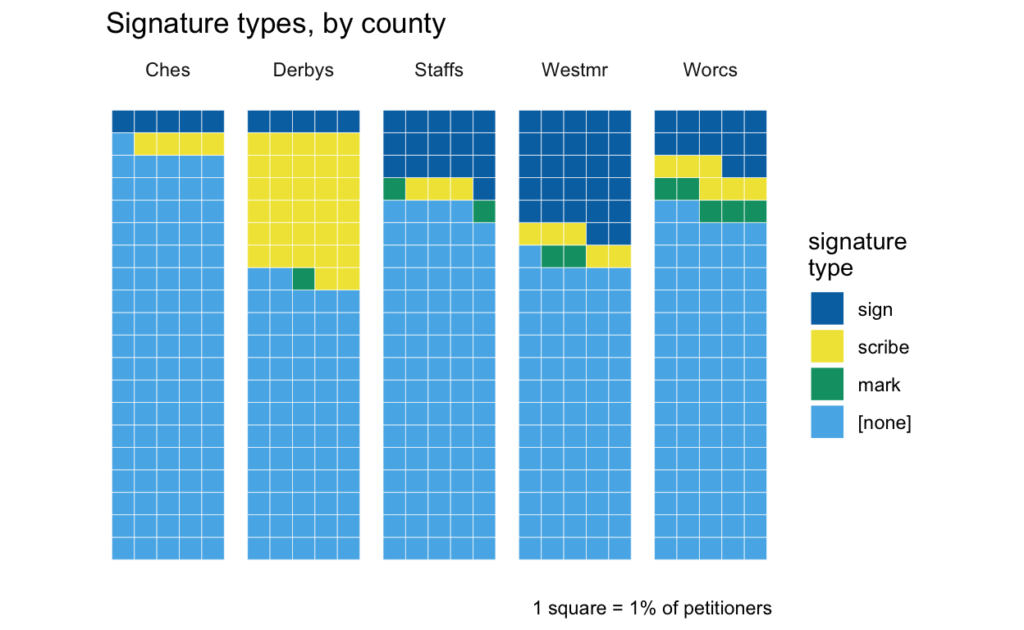 The lower % of women signing their petitions with autograph signatures might come as no surprise. But this also highlights that petitioners who could not write their names didn’t normally choose to sign with a mark instead. 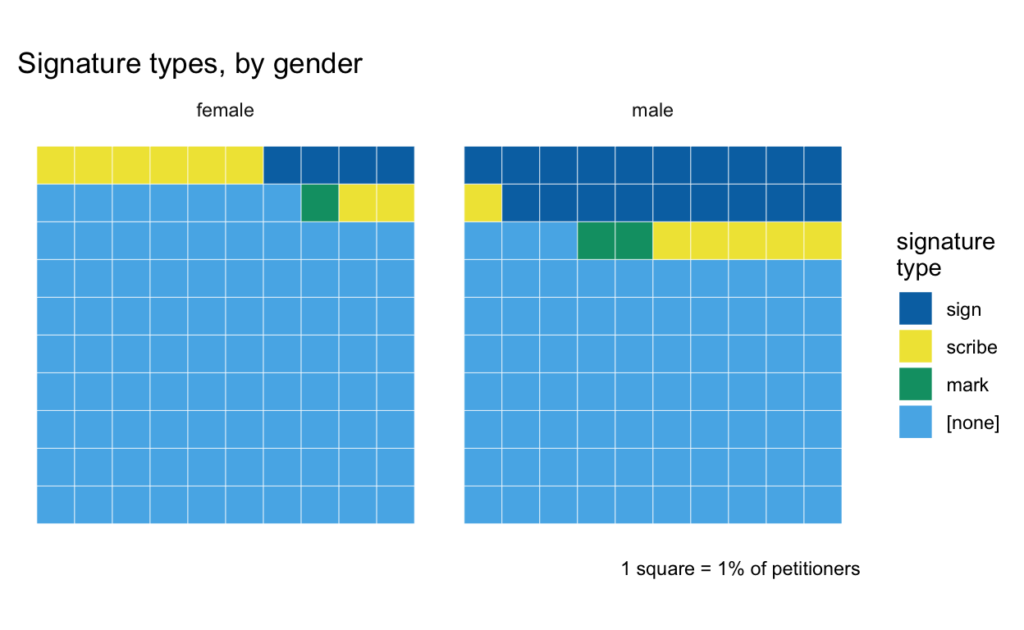 Association between the presence of signatures and specific petition topics is very clear: again, even if this isn’t directly about literacy, there are obvious correlations between higher signing % and topics where you might expect petitioners to be of higher/middling status, and the lowest % of signing are mostly related to poor relief. (There’s no obvious relationship between signing and the size of a topic.) 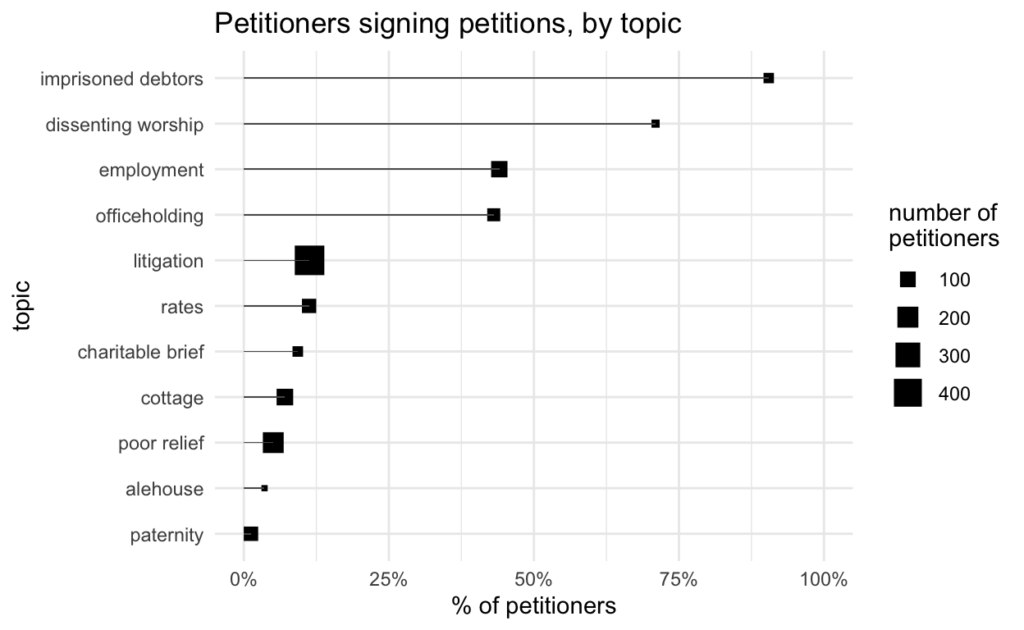 Here, however, there is a strong relationship between the popularity of petitioning and the % of petitioners signing their petitions, as well as the obvious change over time. (51 Westminster petitions couldn’t be dated to within a decade. However, all were from c.1620-1640 and none were signed by the petitioners, so they’d make very little difference to this picture.)

Between the 1610s and 1670s and in the 1690s (the rise in the 1680s is intriguing), signing rates never rose above 10% of petitioners. Also, even though numbers are relatively small, the rate seems consistently much higher in the late 16th century, around 25-30%. From 1700 signing rates rise dramatically again; from the 1710s they never fall below 50% and peak in the 90s in mid century.

(It’s also worth remembering that petitioning declined much more sharply in Cheshire after the 1680s than in the other counties.) 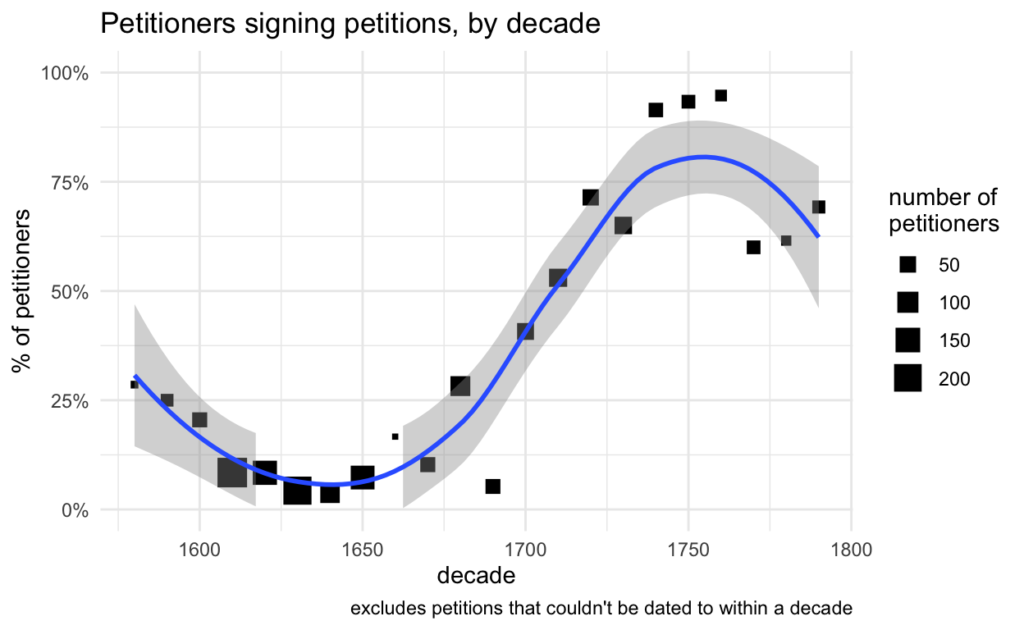 Tracking the % of petitions that have subscribers diverges from the chart for petitioners in some interesting ways. The % is consistently low in the first half of the 17th century, suddenly rises in the 1650s, falls again in the early 18th century before gradually increasing over the rest of that century. Could the sudden jump around 1650 suggest the influence of political revolution on collective activity in much more mundane areas of life? 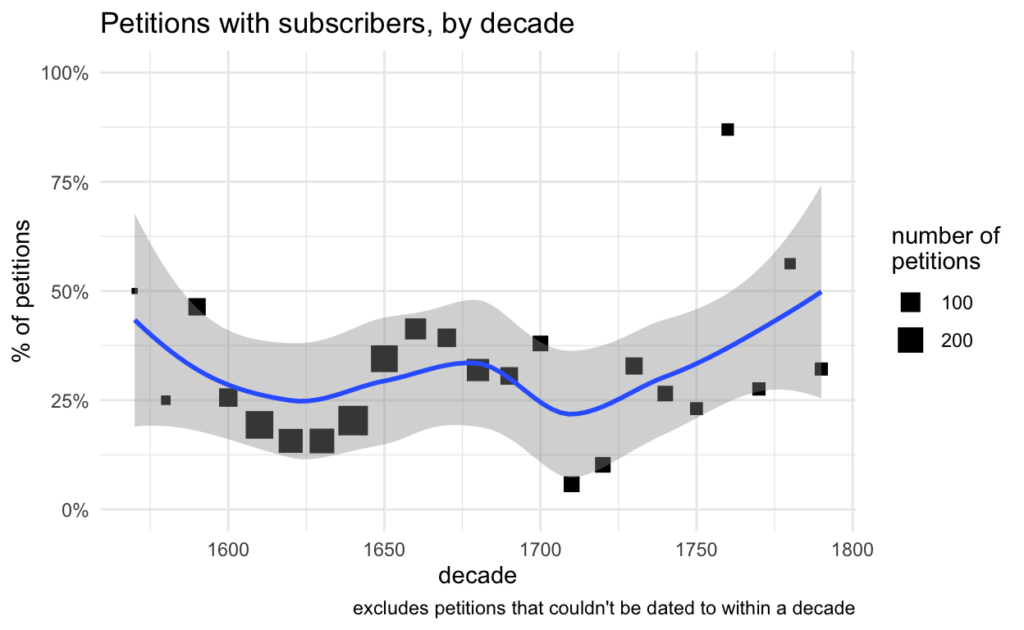