In January, we officially began our project on ‘The Power of Petitioning in Seventeenth-Century England’. The funding only runs for two years, so it seemed sensible to take stock after the first six months to see how we’re doing.

This is an exciting phase for a project like this, because we get to go out and grab a huge amount of interesting stuff but aren’t expected to have anything polished to show for it yet. It also includes lots of annoying admin and paperwork to get everything up and running, though we won’t bore you with the details of that somewhat less exhilarating part of the project.

In order to turn these seventeenth-century manuscripts into something that can be read by non-experts and easily digitally searched, we are professionally transcribing a substantial selection of them. These will eventually be freely available at British History Online, with Gavin Robinson and Tim Wales working their way through the petitions to the magistrates of Cheshire, Derbyshire, Staffordshire, Westminster and Worcestershire, and the petitions to the Crown from the State Papers at The National Archives. All of these are now complete (c.1400 items), so only the House of Lords collection (c.750) remains to be transcribed.

Although hundreds of photographs and raw transcripts are a wonderful starting point, they become much more useable once they have been sorted and categorised in various ways. In some cases this can be partly done using the data from the archive catalogues, while in other cases they need to be directly read and labelled. In the process so far, Sharon and Brodie have focused on the nearly 2,000 quarter sessions petitions – including those from Sussex, Kent and Devon that are not being transcribed – attempting to assign them to eleven broad categories from ‘alehouses’ to ‘rates’. We’re also extracting key information about the petitioners: name, gender and ‘type’ (i.e. individual, group or institutional). In addition, we have started counting the number of signatories on each petition, though this isn’t yet finished.

There is still much more to be done on this part of the process, but the early results are already intriguing. When we throw together all the quarter sessions material into a single chart, we can see a very wide range of requests. The importance of litigation and poor relief is obvious, but many petitioners had other concerns, and the ‘other’ category was very miscellaneous indeed. That said, there were major variations depending on the county and the period, so you shouldn’t take this first glance at the data as an academically rigorous analysis. 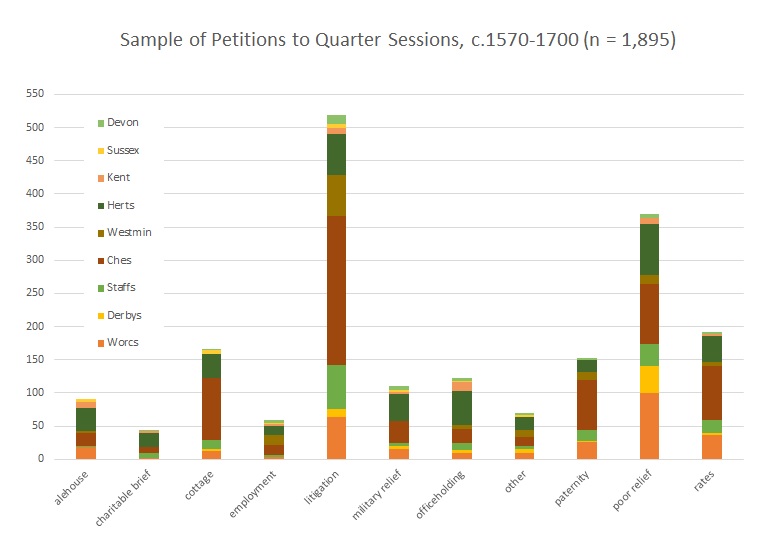 All three of us have been lucky enough to not have any departmental teaching or admin duties during this first six months of the project. We have, therefore, had a chance to catch our breath and think about petitioning in its widest sense.

Part of this has come from going along to events in Lisbon, Birkbeck, KCL and Oxford. This has encouraged us to think about how petitions work in other contexts – including other periods and places – and how they relate to other forms of narrative, memory and protest. Discussions with colleagues at these events has allowed us to get a sense of how our sources and ideas fit into the wider historical and historiographical landscape.

During this period of reflection, one thing we realised early on is that we’d benefit from knowing more about what happens to local petitioning in the eighteenth century. Brodie and Sharon thus decided to put in a bid for a small grant to the Economic History Society to gather and transcribe a selection of material from our current quarter sessions series for this later period, which was fortunately successful. We’ll start this part of the project in September.

Finally, we’ve also been attempting to get some of our early thoughts written down. It has been illuminating to present some of our preliminary work at various events and write up short pieces such as an annotated bibliography and a short introduction to different types of petitions. We’ve also been posting some our finds on twitter at #PowerOfPetitioning. This has not only sparked fruitful discussion with other historians in person and online, but it also helped us identify our current blind spots.

We have a lot more work to do, yet having six months to focus directly on our project and to set up some of the practical stuff means that we’re ready to take our next steps. We’ll soon be able to offer the initial fruits of our research, so look out for the first sets of transcriptions to go online in the autumn.