We have just published full transcriptions of 424 petitions received by the Justices of the Peace for the City of Westminster in the seventeenth and eighteenth centuries. The texts of these requests and complaints are now free to search and read on British History Online. The addition of these Westminster petitions to our recently published volumes for Cheshire, Derbyshire, Staffordshire and Worcestershire brings the total to over 1,300 transcribed petitions available in our series.

The City of Westminster included most of London’s rapidly growing western suburbs in this period, home to about 130,000 residents by 1700. Wealthy courtiers and politicians lived here alongside huge numbers of poorer workers and destitute paupers, so unsurprisingly the law courts here were busy. The petitions transcribed in this volume often arose from local conflicts that led to residents submitting supplications to the local magistrates for assistance, mercy or arbitration.

In 1620, for example, a servant named Elizabeth Sandes complained that she had ‘behaved her selfe in verie civell and honest manner’ in service since arriving in London about thirteen years earlier. However, after the death of her most recent master, Doctor Fisher of the High Commission, she ended up being ‘drawen into follie’ by the false promises of Charles Chambers, gentleman. Now she was pregnant, but Chambers refused to marry her or offer any support. She pleaded for the court to force Chambers to provide some financial help, as ‘in equitie and conscience’ he ought to do. It seems the magistrates granted her petition, because Chambers was then seized and taken to the Gatehouse Prison by the constable. 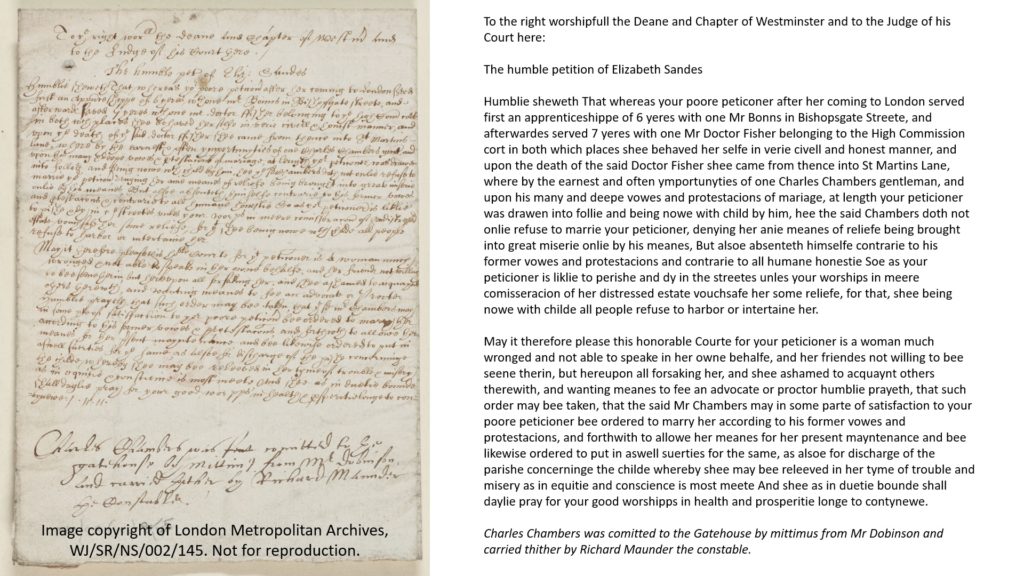 While this is just a single example, it is suggestive of the sorts of stories that frequently appear in these petitions. Many involve complaints from pregnant women or single mothers about negligent fathers. Even more involve servants or apprentices in conflict with their masters. And the largest group of all concern various forms of litigation, whether appeals from victims seeking justice or pleas from accused people seeking mercy. 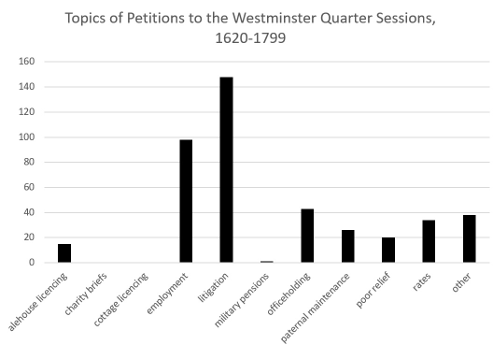 Alongside these many individual petitions, there were also a substantial number from larger groups or whole communities, such as the five men, three women ‘and diverse other inhabitantes in Hartshorne Lane in the parish of Saint Martins in the Feildes’ who petitioned in 1636. They complained that the old watercourse that ran through the lane had been stopped up, leading to floods in ‘all our cellars and lower roomes’ and the spread of ‘daingerous and ill savours’. They sought the help of the magistrates to combat the perilously foul smell.

If you want to know more about petitioning in early modern England to better understand the context of these documents, you could start by reading our free ‘very short introduction’ and then move on to our ever-expanding annotated bibliography of published scholarship. Each volume also has an editorial introduction briefly reviewing who sent these petitions, the topics covered, their place in the archives, and more. We will be publishing further guidance and advice on our Resources page, but for now you can just dive into the sources:

[Note: Unfortunately the search interface on British History Online is currently not working correctly. To search, rather than browse, the petitions series, you can use google’s ‘inurl’ feature. Simply type inurl:”british-history.ac.uk/petitions” into the search bar, followed by the desired keyword. For example, inurl:”british-history.ac.uk/petitions” debt will return petitions including the word ‘debt’. The new Westminster petitions are not yet indexed by google, so will not be included in these results. Apologies for the inconvenience.]

The seventeenth-century petitions were photographed by the archives staff at London Metropolitan Archives and they have been transcribed by Tim Wales. Images of the eighteenth-century petitions were drawn from London Lives, 1690-1800 and the transcriptions there were revised for a higher level of accuracy by Gavin Robinson. The texts for revision were extracted by Sharon Howard from ‘London Lives XML Data’, which is CC-BY-NC licensed. Preparing the texts for online publication on British History Online was completed by Jonathan Blaney and Kunika Kono of IHR Digital.

We are extremely grateful to London Metropolitan Archives, especially Charlie Turpie, Principal Archivist, who supported the creation of these new transcriptions. We highly encourage readers to take advantage of their extensive collections and online catalogue to pursue further research on the individuals and communities mentioned in the petitions. We are also grateful to the Arts and Humanities Research Council and the Economic History Society for their financial support, without which these would not have been possible.

This is the fifth in a series of seven planned volumes which already includes petitions to the quarter sessions of Cheshire, Derbyshire, Staffordshire and Worcestershire, and will soon also include petitions to the Crown and the House of Lords. We will announce the new volumes here as they appear.